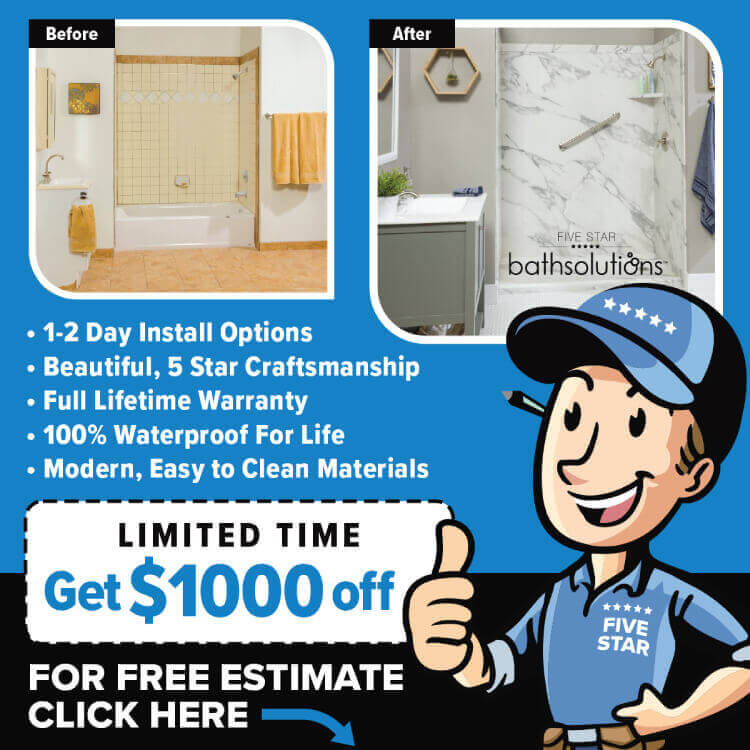 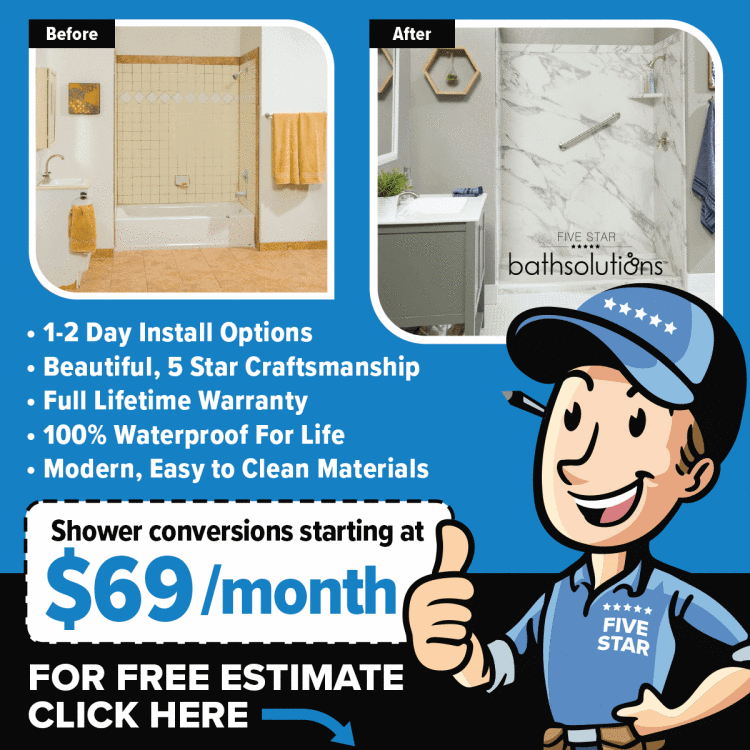 Having to clean bathroom mould and mildew can seem like a daunting task. Once you discover mould in your home you might hear eerie music from an old black and white horror movie playing in the background (cue the Twilight Zone theme music). Don’t fret though! After reading this post you will be armed with the knowledge and skills to kill those nasty spores and restore your bathroom to its sparkling, original state.

There’s a Fungus Among Us!

Mildew is a surface fungus that is either grey or white and is fairly simple to remove using a scrubber and a household cleaning chemical. Mould is black or green in color and sometimes appears fuzzy or even slimy.  I don’t know about you but I can usually smell it before I see it. It’s not a good smell that’s for sure.

Some types of mould spores are harmful. Be sure to wear a mask to protect yourself from breathing in the spores as you are cleaning. Soak down the mould in the cleaning solution before you touch it with anything or you will send the mould spores into the air and risk spreading mould to other areas.

This post covers basic bathroom mould that hasn’t become a huge issue yet. If you think you may have a significant mould problem in your home, get it tested and have a professional recommend how to remove the mould before it causes more damage and health issues.

Because mould likes moisture and has a tendency to grow, reproduce and spread itself around, you want to kill it as quick as possible. Do not ignore it, get out the chemicals and take it out quick. Mould can cause allergies and asthma attacks, irritated eyes and headaches. It can settle in your walls and cause serious damage and continuing problems.

Bathroom Surfaces Where Mould Can Be Found

There are many areas in a bathroom where mould can begin to grow, including: ceilings, shower doors, walls, and curtains, tile grout, and window tracks.

I hate when I find mould on the ceiling. It’s so unpleasant to look up while you’re showering to find overly happy mildew spores establishing a community right overhead.  The kind of surface your ceiling is will dictate what kind of cleaning solution you can use to kill mould. 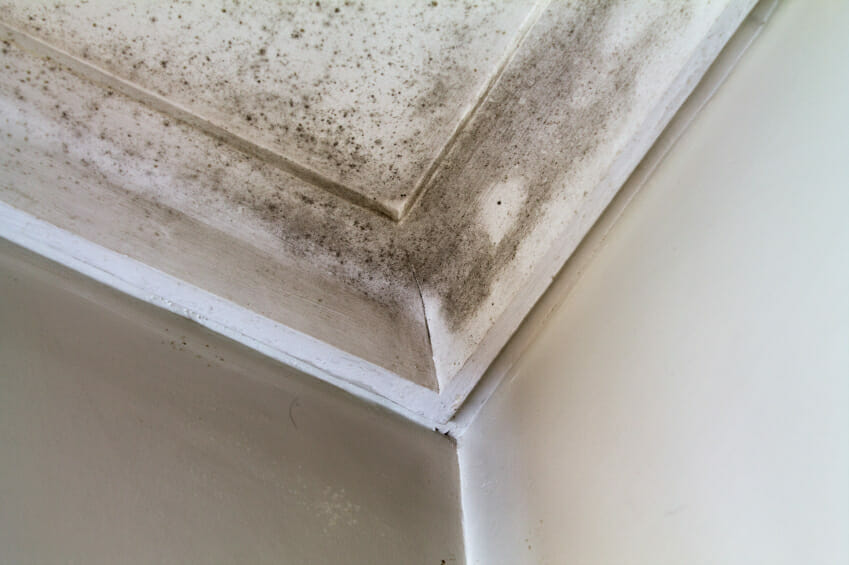 Eew! This is a very gross and, I think, an extreme example of a mouldy ceiling. Please don’t let it get this bad .

Bleach is one way to remove that nasty fungus and any friends it may have brought along with it. I have also used Formula 409 to kill mould on a painted ceiling but I can’t attest to it being very good for your ceiling paint although I didn’t notice any problems. I was living in a really gross rental and the ceiling needed a new paint job anyway. I just wanted the mould gone and 409 did the job. I recommend testing a small unnoticeable area to make sure the surface you are about to clean will not be damaged by the chemical you choose to kill the mould with.

Shower curtains are a pretty easy one to clean in my opinion. Take the shower curtain off of the hooks or rings and put in the washing machine with an old bath towel or two—use towels you don’t care about. Poor a cup of bleach into the washing machine and add detergent. Turn the washer on warm or hot depending on how hot your home’s water temperature is.  Between the bleach, detergent, towels and hot water your shower curtain will be like new once the cycle is complete.

Be very cautious about putting the curtain in the dryer. I wouldn’t do it if I were you, except maybe on the air dry setting to shake out the water droplets.  Hang it to dry either outside or on the curtain rod it came from.  Before you hang it up on the hooks, take a look at the bottom of the curtain. If it has a lip on it where the water tends to get trapped—I have only seen this on cheap curtains –I recommend taking some scissors and cutting that bit off. It’s only going to start growing more mould again so there is no reason to keep it on there.

This is a surface where bleach will work just fine to kill mildew and mould. Mix a ratio of one cup bleach to one gallon of water and using either a bucket or a spray bottle apply the solutions to the surface of the shower walls and door. Don’t forget about the door track; that is one of the first places mildew will make a home in a shower stall because the water that get’s in that small area often doesn’t dry out fast enough.  If you have discovered that mould grows in the door track of your shower, make a point to keep the shower door open after you’re finished showering so it has a chance to dry out

If you have grout that has sprouted mildew or mould, I recommend using Tilex, or Formula 409, and a toothbrush. Soak it down, let it sit for a minute and then scrub it up. Because tile is tedious to clean, especially with a toothbrush, spray and scrub it down in sections.

After all that work to clean that grout I suggest you make a point to seal it so it doesn’t have a second chance to grow more mildew.

Because porcelain is a nonporous surface you can use just about any chemical to kill the mould. Use Bleach, Tilex or Fomula 409 to kill the fungus. Don’t forget to use gloves!

If you are not a fan of the fumes these chemicals put off there are a list of other products that you can use to kill mould and mildew that are less harmful. I could go on for days about household products for mould removal, but I think blackmold.awardspace.com does a great job of explaining the details of all of that. Check out their sight for household products that may be the ticket to killing your mould problem using products such as bleach, borax, vinegar, ammonia, hydrogen peroxide, and more.

Please be smart and don’t start mixing chemicals, it’s a bad idea. Many harmful chemicals can be odorless. 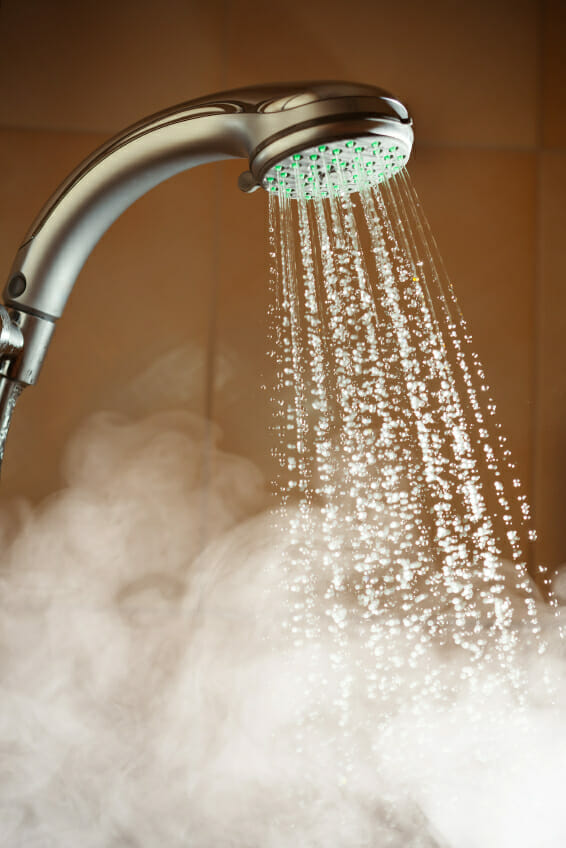 See all that steam that’s waiting to settle into every corner of your bathroom and invite mould to take up residence?

Mould happens sometimes. The best practice is prevention. Make sure to let your bathroom and shower area dry out thoroughly after use. Clean out the fan regularly so it can function properly. After showering or bathing, open the window and leave the bathroom door open. If you discover mould in your bathroom, or anywhere for that matter, the important thing is to clean it quick and do it right so you don’t have an even bigger issue on your hands later.

At Bath Solutions we recognize the importance of beauty and functionality. We come up with beautiful solutionsfor your bathroom design needs and give the project the attention it deserves. We have multiple locations to serve you throughout Canada. Click here to request a free estimate.